Considering the weather for the past week, I’m not sure what season it’s supposed to be. The weather here in Melbourne changes often and changes fast – before your eyes, it will go from sunny and hot to a downpour in a matter of seconds.

Last week, I was at the beach with a friend enjoying clear blue skies and 37 C ( 99 F) temperature. We were looking forward to a long afternoon of cooling off in the water and relaxing in the sun when a single dark cloud brought a monsoon down on us. We ran to the tram stop where we were soaked for lack of cover. What was more frustrating was that we could still see endless blue skies on one side of the beach while we were getting drenched.  Our significant others had a good laugh at us as they were both stuck at work and had no sympathy that our beach day was cut short. (The meme below was circulating on FB from several people in Melbourne that day) 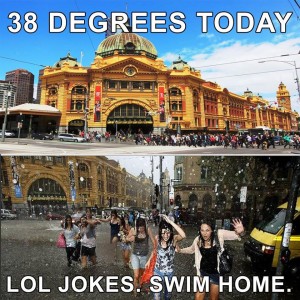 Every day since, the weather has been unpredictable. Temps change daily from close to 40 C down to 18 C and back up again and rain clouds move in as quickly as they move out. It’s a bit like SF but more extreme! Thankfully we did get another nice hot day this week and were able to return to the beach – where we both proceeded to get sun burnt.

The sun here is SO STRONG! In general, I rarely burn and on top of it, with my added age and wisdom I’ve made it a point to prioritize sunblock over the past few years. I wish I could say that it was for the health of my skin but really it’s vanity driven – I don’t want to wake up as a 50-something-year old hand bag one day.

Apparently, there is a hole in the ozone layer above Australia which makes it that much easier to get burnt. Even if the temp isn’t super high, you can very much feel the strength of the sun. So, despite my precautions, I have the faint resemblance to a raccoon. Thankfully, the burn is quickly healing and fading. We’ll have to be extra vigilant about applying sunblock generously and frequently while we are here.

In other news, Ben is in Hong Kong this week for some client work. He’s gone for two weeks. I’ll be spending the time begrudgingly beginning the process of job hunting and hoping for more sunny days to get to the beaches (so that I can further avoid the dreaded job hunt)… but if Ben asks, I’m inside tirelessly sending out my resume! 😉 It’s not necessarily the job but the job hunt that is so tedious and tiresome.

As a note, the attached pictures were taken within days of each other. I will say that the changing skies do create some beautiful skyscapes.